Sleeping with Dogs and Cats 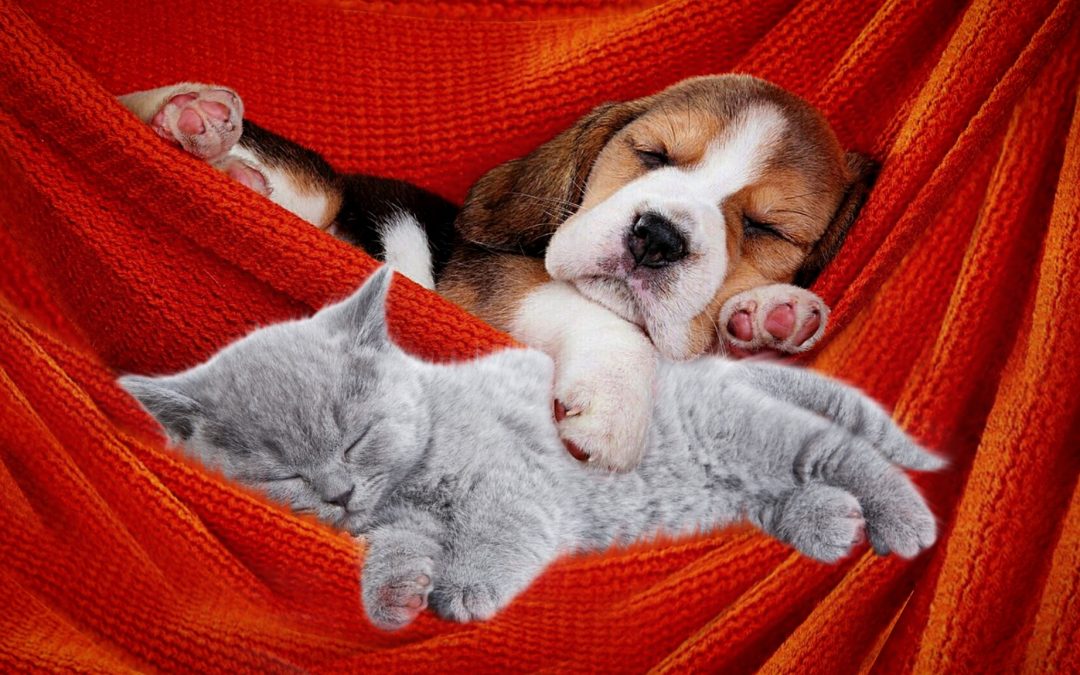 Where our pets sleep can be a troublesome topic

“Earthquake!” The bed was shaking. Startled out of a deep sleep, I opened my eyes. There was a dark mass just inches from my face. As my ability to focus awakened, I realized the mass was a head. A dog head. The “earthquake” was my Rottie telling me it was time to get up by bumping her chest into the mattress.

I’ve had several dogs in my lifetime and even more cats. Pound for pound, they probably even out since I’ve mostly been a big dog fan. I’ve realized over the years that sleeping arrangements for the pets is a topic that might rarely be discussed but is certainly felt.

My first Rottie slept in her crate until she was old enough for me to know she would neither wreak havoc nor pee on the carpet in the night. Early on, she didn’t like being locked up on her own, but as she got used to it, she grew to love it. Once she matured, she still loved sleeping in her doggie den that looked surprisingly like a crate, but she also enjoyed the option of sleeping on a large dog bed in my room. This would change once I got involved with a woman with three cats and zero dogs. (Yes, I was a tad suspicious of her choices, but then, she was even more suspicious of mine. Apparently, not everyone gets giddy when they hear someone has a Rottweiler.)

At first, we tried having her sleep in her crate, but as our house was only a bit bigger than a child’s playhouse, space was at a premium. (This was back before tiny houses became chic. Back then, they were simply tiny.) There was just no room for her huge crate unless we wanted to put a piece of plywood across it and call it our kitchen table. We stuck with a more traditional table and traded the crate for a super-sized dog bed. At first, the dog bed was placed near my side of the bed. Who wouldn’t want a fiercely loyal Rottweiler sleeping near them at night?

Turns out, my partner. To her credit, she tried, but the problem was, that dog could snore! She woke up one time convinced someone was trying to break into our house using a power drill and wondering why the dog was not reacting. She wasn’t reacting because she was the power drill. Her bed got dragged out into the hallway the next morning. Our house being small, moving the bed didn’t help a lot, but when it comes to snoring, even lowering the decibel level a little could mean a better night’s sleep. Also, she was still close enough that she felt secure and could easily come and wake me up, if necessary, by bumping the bed.

I had never been one to want my dog on the bed at night. Maybe if I’d had a little dachshund or other hors d’oeuvre-sized dog, I would have felt differently, but there was no way I wanted to share my pillow with a 100-lb drooler. I loved her deeply but that didn’t mean she needed to sleep in my bed. My partner agreed, so that was an easy one. The cats, however, were a different matter.

My new partner had been owned by cats for her entire adult life and as is probably natural for a single person, they slept with her. I grew up believing I was severely allergic to cats, so had never had a cat in my life, much less three of them. Young love being what it is (we were 27), I committed to daily allergy pills and a plan to wing it if that didn’t work. It ends up I am only mildly allergic to cats, but I am moderately claustrophobic when it comes to sharing a bed with them.

One night only a couple of weeks into our relationship was particularly memorable. We were staying at her place, she was sound asleep, and so were all the cats. I was pinned in on both sides by long, furry felines. One of them was a 30-pound Garfield-esque cat, so when I say I was pinned in, I’m not exaggerating. My heart started racing. The sound of everyone’s breathing became like a torture device in an Edgar Allan Poe story. The darkness of the room felt like it was going to smother me.

I finally couldn’t stand it anymore and launched myself out from under the covers — and the cats. Everyone remained sleeping as I spent the next half hour coming down from the mild panic attack by writing in my journal. I’m fairly sure it was some angsty trash about not knowing how this relationship was ever going to work as long as we had to share a bed with three cats. We eventually worked it out. She’d try to keep the cats on her side of the bed and I found this worked well as long as I moved my legs every time one of the cats tried to snuggle in next to me. It’s not that I didn’t like them, or that I was mean-spirited. I just couldn’t handle being trapped in the bed.

It wouldn’t be until my mid-40’s when I was in a new relationship that animal sleeping arrangements would again surface. Somehow, I ended up with another cat person with little experience with dogs. The exposure she’d had was not positive, so when I started talking about wanting a dog, it was not an easy sell. Still, she was willing to try. We got a rescue puppy, thinking a puppy would be less intimidating than a full-grown dog. As much as I wanted another Rottie, due to their size and the fact our house has stairs, we chose a Pit Bull mix. (I didn’t want to have a dog I couldn’t carry up and down the stairs should leg or hip problems develop.)

Given I’d made this compromise, I thought it was clear the dog would sleep upstairs in our room with us. In addition, since my wife (yes, this was a serious relationship) traveled a lot for work, she wanted a dog that would protect me and the house when she was gone. All those things added up in my mind to the dog being incorporated into our large master suite. In my wife’s mind, because we had two cats, the upstairs would be their safe zone and the dog would always stay downstairs, the most obvious entry point for any bad guys.

I agreed to this arrangement believing that eventually, the dog, the cats, and my wife would all bond and we’d live happily ever after. It was naive but I tend to be an optimist. The dog, Kola, slept in her crate as a pup to keep her and the house safe. Over time, this became her safe spot, and to this day, she asks to be put to bed in her crate around 8:30 every night so she can calm down and go to sleep. One time we brought the crate up to my daughter’s room so Kola could sleep with her, but she just wouldn’t calm down with her crate away from its normal spot in the kitchen. Thus, Kola is a downstairs dog who sleeps in her crate.

On the other hand, the cats can go anywhere they please, including in, on, and under our bed. If they want to walk across our faces, that’s fine. Shove us apart so they can be in the middle? That’s cool, too. My wife welcomes them into our bed without feeling the least sense of injustice that I had to give up having a dog anywhere upstairs but I am expected to sleep with the cats.

In some ways, I get it. Cats are smaller. They generally smell better. They don’t snore as loudly as dogs. They are stealthy and usually come and go without shaking the whole bed. Also, as I have mentioned before (Spoiling Your Cat is the Quickest Way to Success), Max and I have worked out a deal so we can get some cuddle time without him boxing me in or sleeping with me all night. So, yes, maybe sleeping with cats is easier than sleeping with dogs. Still, I sometimes feel put out by the inequity of it all.

Two nights ago I was thinking about this very issue as I struggled to fall asleep. My wife was already out, as was Jasper who was stretched out comfortably across her stomach and legs. Max had already visited me and was snoozing in the cat tree in the corner of our bedroom. The house was quiet except for my wife’s steady breathing. Even Jasper’s dreaming bird sounds had ceased. Suddenly I heard a distant rumbling noise. It almost sounded like a power drill. As I listened, the source became more obvious. Maybe it was good that Kola sleeps downstairs after all.

If you enjoy my work and don’t want to miss my next essay, please consider signing up for my free weekly newsletter. I’ll provide links to my latest essays, updates about my books, and links to my favorite things of the week that I think you will enjoy.

My goal is to have this be your favorite newsletter because it puts a smile on your face and leaves you feeling positive. Click here to start the fun.